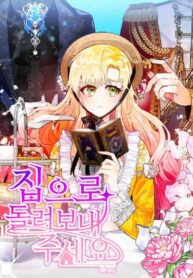 집으로 돌려보내 주세요 The protagonist, who loves romance novels, possessed a character in the world of the novel as soon as she received a confession from her crush, Yejun. In the novel, she possessed a fallen aristocrat named Beatrice. Rather than having a sweet relationship, she was threatened with her life. Daniel, the suspicious fiance who tries to take her life every now and then, and Ellin, the cursed imperial knight that protects her from him. There were strange feelings surrounding the two. “I want to return home!” Will I be able to return safely without dying…?